Are You Ready to Come Face to Face with the Green Meanies? 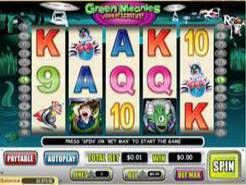 Play Now
Chances are you won’t answer that question until you know what the Green Meanies are. It’s a nice title, and Wager Gaming has come up with an alien-themed slot to match it. Aliens pop up a lot in slot games, but at least the ones here are cute! Well, we think so, even though some are supposed to look menacing. What’s the game like, though? Could it be a winner for you?

You have 25 lines to bet on, and you can reduce this number if you prefer. There are five reels and three rows in place, so it’s built on a familiar footing.

Lots of WGT titles have minimum coin bets of a cent at a time, and maximums of $10. That holds true for this slot as well.

The paytable reveals the one-eyed green alien with white hair (yes, really) is truly a wild symbol. This is the titled Green Meanie and it will appear only on even-numbered reels. There’s a scatter too, which is a lady who has been taken hostage – likely by an alien tentacle! Two or more win you a scatter prize, and as the name suggests, they can appear anywhere.

You can, and the Green Meanie is the symbol that will bring it to you. To access it, you must find a Green Meanie on both the second and fourth reels at the same time. This isn’t a free spins feature, but rather a re-spin feature. Both Green Meanies expand to fill their entire reels. They stay in place that way for five re-spins, which are free to you. Remember, the Meanies are wild, and will replace everything by the hostage scatter. The re-spins can’t be re-triggered in the same way free spins sometimes are, since those two reels are held as the Green Meanies in expanded mode.

So, no free spins to play? True, but those re-spins can be very powerful when it comes to winning some nice prizes. It can make it easier to get wins of three, four and even five symbols matching on a line, so this game is one to play. Face up to the Green Meanies and see how brave you are!
Play Now 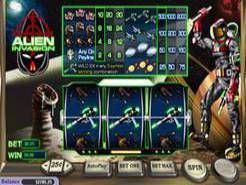