Princess Jewels Offers You the Chance to Collect Some Jewels 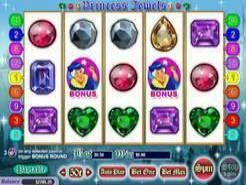 Play Now
Jewels and gems are a common sight on plenty of slot games. However, this game by Wager Gaming has more of them than you might realize. The jewels are owned by the princess and she appears on the paytable included with the game. You’ll find other things here to look at as well, which means you could be surprised at how pleasant the game is to play.

You may not realize this game only has nine paylines at first, because there are five reels in action. However, this is what is promised and it makes it easier to bet on the options.

Would you believe nine cents is all you need to bet on all the lines in this game? It’s true – you can enjoy betting on those lines and only spending a cent per line to do it. Mind you, it’s possible to increase your line bet to as much as $10 if you like as well.

Yes, and these are revealed on the paytable. You can watch for the princess to appear, and she pays out as a wild as well as appearing for winning combinations in her own right. Five princesses forming a line guarantees you the jackpot of 10,000 coins. Each gem is worth a certain amount too – some require three to appear on a line to trigger a prize, and some only require two to appear. Finally, there is someone else in the game – she looks like a fairy godmother. She must appear three times to trigger a bonus feature.

This was mentioned above. The game takes the shape of a wheel with three tiers. You get a maximum of three spins of the wheel to get a prize. You will win something on the first spin, and you must then decide whether to spin again to try and better that prize, or whether to take the amount you’ve won. If you go through to the third spin, whatever you get there is the prize you take with you.

This game doesn’t have free spins but the appearance of a bonus feature is pleasant indeed. You can also look forward to getting some great gem combinations if you are lucky – which you may be.
Play Now 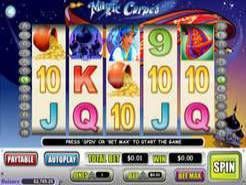